Path of Pins is a visual re-telling of Little Red Riding Hood, revolving around adolescence and the ever-changing representation of female characters in folklore.

In one of the earliest spoken versions of the fairytale, which later inspired Charles Perrault to write his ‘Petit Chaperon Rouge’, the wolf asks the unnamed heroine: “Which path will you take?”, to which she responds by choosing the path of pins, the careless and fleeting one – as opposed to the path of needles, the irreversible way of the wolf.

This decision of the pins reflect two interesting aspects: On a personal level, by refusing to follow the prescribed path, the heroine decides to stay a child and favours the state innumerable possibilities. Exploring what lies beyond, she leads us deep into the forest. On an abstract level, this metaphor of pins and needles relates to how fairy tales are being treated: Like a butterfly collector, Perrault kills the living, ever-evolving oral tale, to present it to the reader in a pose he artificially forced upon it: He coerces the heroine into the corset of his ideologies. Compared to the early variants of the narrative, where the heroine tricks the wolf, Perrault reduces her to a naive girl guilty of her own violation.

The fairy tale questions authorship: Every form of retelling or reenactment embeds former versions of it, repeats it, alters it, so it will never be original – no authorship can be claimed over it. The fairy tale gives birth to itself.

Therefore I work with my friends, my family, my own body. It is a dreamlike state, where logic does not apply anymore and time works differently. The preconscious mind draws connections, develops a narrative I wasn’t aware of and finds analogies between this universe and reality, stitching these worlds
together.

The tale develops, slowly, growing with each iteration, like a living creature.

Translating a physical experience into the virtual space is in my eyes neither possible nor sensible. Referencing a non-existent physical space only adds a layer of translation and increases the feeling of alienation for the viewer.

Instead, I want to emphasise the strength of the digital realm. During my research, I discovered a lot of similarities between the concept of the fairy tale and the internet: Both work with an in-between state that is neither physical reality nor fantasy, but a possibility to embody abstract ideas. In both there is no clear border between user and producer: every participant can switch between these positions quickly and spontaneously, who was just listening is the telling their story in the next minute. I believe this is a feature of the democratic aspect of the internet: The ability to shape it on a communal basis.

To highlight these ideas I created in collaboration with a friend of mine, Robert Mondry, a virtual space that invites the viewer to not only look at the images but to actively participate in the creation of the story: They can rearrange and resize the images. This happens in real-time, so every action one participant takes will appear directly on the screens of every visitor. This creates a visual dialogue between the viewers and reiterates the communicational aspect of the fairy tale. 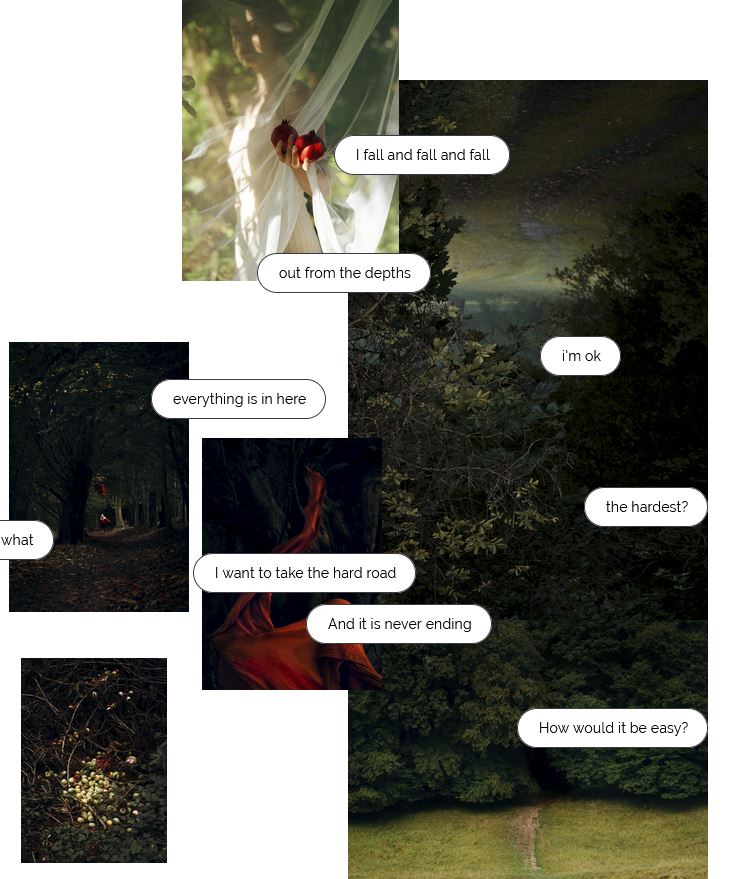